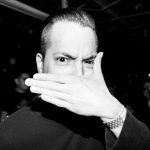 IN PRIVATE COLLECTION OF

Shek Vega is a 20 year veteran of the street art scene, with his beginnings seeded in graffiti art. As the years progressed he soon became interested in fine art and began molding his style to become a hybrid of the two. Today, he is well known and sought after for his signature filigree and owns three celebrated companies that pioneer street and mural art as well as artist advocacy. To date, he has aided in the creation of over a hundred pieces of public art and has raised over 40K for non-profits, charities and art organizations.

His personal art is grounded in humor and pop culture, usually depicting a commentary on his chicano roots or the zeitgeist of the moment. Known for its clean lines and brilliant use of color, Shek Vega has become one of Texas’ most sought after muralists and artists gaining him elite clientele and collectors from around the world.

As we slowly come back from the aftermath of COVID, we are currently strengthening programming at our non-profit, the San Antonio Street Art Initiative. Sign up to be the first to know when we are back up and running with new merch. In the meantime, thanks for all the support!